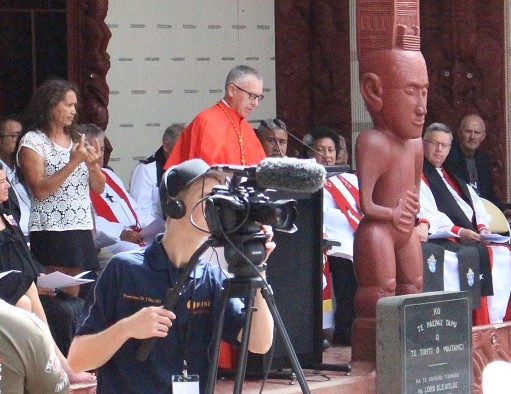 Cardinal John Dew is urging New Zealanders on Waitangi Day to recommit to protecting the beliefs of followers of all religions and of non-religious people.

Speaking at the interdenominational church service at Waitangi today, Cardinal Dew recalled the Christchurch mosques massacre last March and said New Zealand’s tradition of religious freedom was first affirmed at the signing of the Treaty of Waitangi in 1840.

“It is time to recommit ourselves to protecting the faiths of all who live here – of Māori custom and spirituality, of the different Christian denominations, of Muslims, Jews, Hindus, Sikhs, Buddhists, Bahai’i and many other faiths; and also the freedom of religion and conscience of those who profess no faith,” Cardinal Dew told the service, at Te Whare Rūnanga.

Cardinal Dew, pictured during his homily (picture courtesy Lara Thorne, Pahia), is the Catholic Metropolitan Archbishop of New Zealand and Archbishop of Wellington. He said much discussion in recent years focused narrowly on whether New Zealand was a secular country where religion was not part of the public sphere; or whether it was a Christian country where only one form of public prayer should be privileged.

But our heritage was religious tolerance, religious inclusion and religious acceptance.

“I am a Christian, I preach Christ, who offers and brings salvation to all  humanity,” he said. “Christians do not want to be less than we are, we do not want to be silenced or marginalised, to be told that the faith that gives us life is just a private matter. Neither do we want any other religious group, or people of goodwill who do not identify with any religion, to be marginalised, silenced or told their beliefs are only private matters.”

At the signing of the Treaty in 1840, Bishop Jean Baptiste Pompallier – the first Catholic Bishop of New Zealand – asked the representative of the British Crown, Captain William Hobson, for religious freedom to be respected.

“Here at Waitangi on 6th February 1840 there was a hope, wishes, a vision of what Aotearoa New Zealand could be," said Cardinal Dew, adding that religious freedoms were also affirmed in the first debate in the new colonial Parliament in 1854.

“It is good that we look here to Waitangi, where in these first sacred discussions about the way to live in partnership with each other, my predecessor Bishop Pompallier asked for and received a guarantee of religious freedom and protection.

“It is religious tolerance, religious inclusion and religious acceptance that is our heritage. We honour and celebrate that today,” said Cardinal Dew.