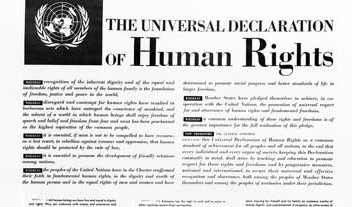 Human Rights Day is always an opportunity to consider how we as a community are doing to look after our most vulnerable members.  Saint Pope John Paul II described international agreements around human rights as “the universal law written on the human heart”, an international moral logic which finds expression in different forms but can unite all social groups.

One significant area of human rights law and practice which has been urgently overdue for reconsideration is how we treat temporary migrant workers, who come here to fill labour shortages and gaps not able to be covered by New Zealand citizens. We ought to be grateful for their contribution and ensure they are protected, but that’s not always the case.

Workers being asked to pay exorbitant rents for accommodation organised by their employer. Workers being asked to work beyond their rostered hours, or asked to work as volunteers without pay. Workers unable speak up about about physical and psychological abuse experienced at work. And workers unable to talk about exploitation because if they do, they fear they will lose not just their jobs, but also their homes and their right to remain in the country.

Those are examples of mistreatment happening to workers within the Archdiocese of Wellington, told by members of the Filipino chaplaincy.  We’d like to think that New Zealand is a place where these things don’t happen. But unfortunately they do.

In 2014 I attended the Santa Marta Conference on human trafficking, held in London. It opened my eyes to the reality of people who experience labour exploitation, human trafficking and other modern forms of slavery. It also opened my eyes to the fact that for many people experiencing bad working conditions or restrained movement, sometimes church is one of the few places they are able to go. Pope Francis made an appeal to us for all people to be aware in churches, temples and mosques of people working very long hours, or who don’t seem to have freedom of movement, or may have their passports withheld.

In New Zealand, it is good that we have a growing awareness of the reality of these concerns.  The Ministry of Business, Innovation and Employment has just completed consultation on their proposals to address temporary migrant worker exploitation, and the Archdiocese of Wellington has made a written submission expressing support for the direction of their “Prevent, Protect and Enforce” approach.

We strongly support suggestions such as those for an MBIE dedicated migrant exploitation 0800 number and specialist migrant worker focused teams. However, something that is missing from  the document is the recognition of churches and other parts of the community as places that migrant workers bring concerns about employment.

In our situation, it was some parishioners noticing a number of new arrivals at Mass, which led to friendships, to meeting basic needs such as those for warm clothing, to hearing about workplace difficulties and resulting visa problems and concerns.

We understand that some people know their working or living conditions are unfair, and are afraid to speak up about it, because their immigration status depends on their employment. We also know that some people know that their working conditions in New Zealand are below our legal minimums, but they are prepared to put up with it because the alternative in their home countries is worse. And some people new to this country don’t even know what our labour laws say.

We need good legislation, policies and resources so government agencies can ensure fair and decent standards for everyone working in New Zealand. However, for many of us, the way to overcome these issues is first to get to know one another. So let’s listen, let’s watch out, let’s respond with kindness and welcome. Migrant workers are not a problem to be solved, but are our brothers and sisters, who we welcome with respect and love.