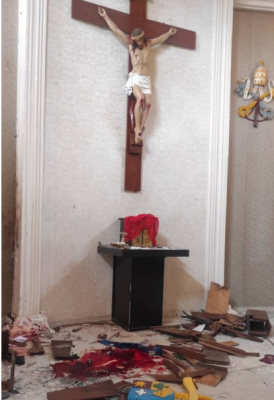 The Catholic Bishops of Aotearoa NZ have issued a statement in solidarity with the victims of the massacre at St Francis Xavier Church in Owo, Nigeria, during Mass on Pentecost Sunday. The text of the statement is below:

Catholics in Aotearoa New Zealand stand in solidarity and prayer with the parishioners of St Francis Xavier Church in Owo, Ondo state, Nigeria, following the monstrous atrocity committed at their Pentecost Sunday Mass.

Unidentified armed men attacked the church during Mass, killing as many as 50 parishioners and wounding many more. It was a shocking tragedy in what is the normally peaceful south-western part of Nigeria.

The Catholic Bishops of Aotearoa support the message sent by Pope Francis to Bishop Jude Ayodeji Arogundade and the faithful of Ondo Diocese, conveying the Pope’s sorrow at the attack and assuring His Holiness’s spiritual closeness for those affected by the “act of unspeakable violence.”

We also note and affirm the comments by the National President of the Catholic Laity Council of Nigeria, Sir Henry Yunkwap, that ordinary Nigerians are tired of words from their political leaders and want action, including the urgent arrest and prosecution of the perpetrators of this evil act.

Nigeria has experienced growing lawlessness in recent years, much of it directed against its Christian communities, who are about 45 per cent of the population. Sunday’s attack happened a week after the head of the Methodist Church in Nigeria was abducted and a ransom demanded for his release. Two Catholic priests were kidnapped a fortnight ago in the home state of Muhammadu Buhari, the President of Nigeria. Many New Zealanders will recall the horror of the kidnapping of Christian schoolgirls by a terrorist group. Churches have been attacked before, but not with the savagery seen on Sunday.

New Zealanders have a particular empathy with the victims of atrocities at religious places, because of our recent experience of the tragedies at the mosques in Christchurch in 2019.

We ask all New Zealand Catholics to pray for their sister and brother parishioners in Owo and to pray for peace in Nigeria. We stand too with Pope Francis in praying “for the conversion of those blinded by hatred and violence, so that they will choose instead the path of peace and righteousness.”

• A PDF version of the statement is online at this link.