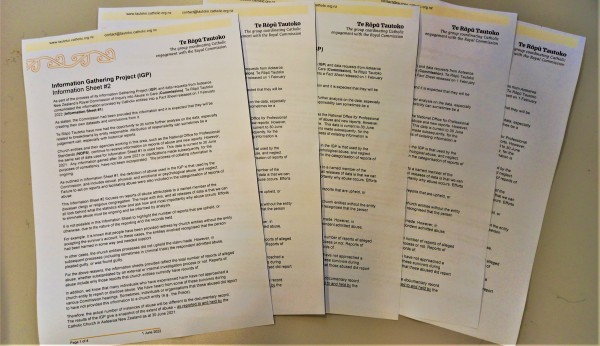 Continuing research has produced further details of where and by whom much of the reported abuse in the Catholic Church in Aotearoa New Zealand was committed.

The research is being undertaken by Te Rōpū Tautoko, the group that coordinates Catholic Church engagement with the Royal Commission on Abuse in Care. Te Rōpū Tautoko has today published an Information Sheet from its ongoing Information Gathering Project, expanding on research published in February.

The February research found that a total of 1680 reports of abuse were made nationally between 1950 and 2021 by 1122 individuals against Catholic clergy, brothers, nuns, sisters, and lay people, with 592 alleged abusers named. Almost half the reported abuse involved sexual harm. The 1960s and 1970s were the decades when the most reported abuse was alleged to have happened, with three quarters before 1990.

The additional Information Sheet published today expands on the February material and looks at reports of abuse about members of specific dioceses and congregations. It shows that the five Catholic entities with the highest totals were the St John of God brothers (269 complaints), Marist Brothers (157), Sisters of Nazareth (155), Archdiocese of Wellington (145), and Diocese of Auckland (124).

The research found that most of the abuse alleged against priests and brothers was for sexual harm of children, while most of the allegations against sisters and nuns was for non-sexual harm.

Te Rōpū Tautoko chairperson Catherine Fyfe has asked Church leaders to reflect on questions that arise from the data.

“By publishing this information now, the hope is we can all look behind the statistics and ask how the abuse occurred and why it occurred,” said Catherine Fyfe. “Most importantly, we must ensure that people are safe in the care of the Catholic Church today and that survivors are supported when they come forward. We recognise the Church’s continuing efforts to eliminate abuse through safeguarding efforts and making redress for the past.”

Te Rōpū Tautoko represents the country’s six Catholic dioceses and more than 40 Catholic religious congregations (also known as religious institutes, orders or associations). The research includes records of 428 Catholic parishes, 370 Catholic schools and 67 other care institutions. It was compiled for the Royal Commission on Abuse in Care. The Church asked to be included in the work of the royal commission.

Commenting on the research, Father Thomas Rouse SSC, a Columban priest recently elected as president of the Congregational Leaders Conference of Aotearoa New Zealand, said: “While various factors allowed abuse to occur in Catholic institutions, the factors that we are addressing most strongly today are the improved formation of candidates for priesthood and religious life as well as best-practice safeguarding protocols for all involved in Catholic ministry.”

Cardinal John Dew, President of the NZ Catholic Bishops Conference and a Te Rōpū Tautoko member, said: “We acknowledge that there were significant barriers to people coming forward to the Church to disclose abuse in Catholic contexts. While much work has been done to overcome this, and people have come forward, we are committed to doing all we can to reduce currently existing barriers and ensure survivors are supported as they share their traumatic experiences.”

Sister Jane O’Carroll SM, Marist Sisters leader and Tautoko member, said: “The training for the kind of work undertaken by some clergy and members of congregations was limited and, in some cases, exacerbated by poor psycho-sexual training. Being placed into ministry gave access to vulnerable people for some individuals who should never have been placed in a position of caring for others. Offenders should have been removed from positions of responsibility, reported to the authorities and received treatment and management through safeguarding plans. That many Church authorities failed to take these steps over a long period was unacceptable and should not have occurred.”

The Information Sheet published today uses the same set of data as the February material and is based on records of abuse made to Catholic entities up to 30 June 2021. It includes sexual, physical, and emotional or psychological abuse; neglect; facilitating abuse; and failure to act on reports of abuse. This latest analysis focuses on records of abuse where an alleged abuser was named, and so excludes reported allegations where an alleged abuser could not be identified. The February data includes all reported abuse, by people named and not named.

Te Rōpū Tautoko is continuing the work of analysing and reviewing the data produced in this Information Gathering Project. As well as being provided to the royal commission, the work will help Church leaders with safeguarding policies and with redress processes for abuse survivors.