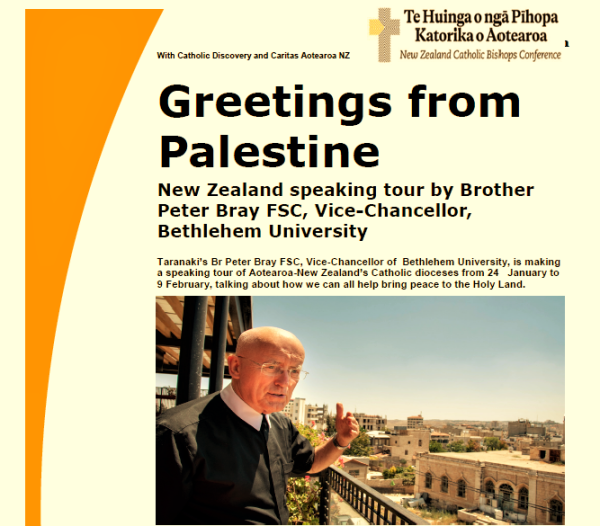 Br Peter has been invited by the NZ Catholic Bishops Conference for a speaking tour of the six dioceses between 24 January and 9 February.

Br Peter moved from Wellington to Bethlehem, the birthplace of Jesus, in 2008 to take up the vice-chancellor role. His work as a teacher and education consultant has taken him around the world.

Bethlehem University was founded by Br Peter’s De la Salle Bothers in 1973. It was the first registered university established in the Occupied West Bank territory of Palestine and is the only Catholic university in the Holy Land. It currently has 3259 students (Muslim and Christian), 17,282 graduates and 214 faculty members. It celebrates its Golden Jubilee this year.

This is the itinerary for his tour:

In preparation for his speaking tour, Br Peter has made three videos based on his daily work with Palestinians and Palestinian students at Bethlehem University. The videos are online here.

The bishops’ statement on Palestine is online here.