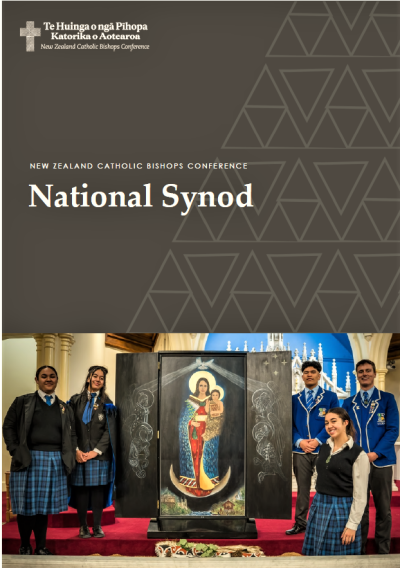 Six strong themes have emerged from the diocesan and national Synod processes undertaken in the Catholic Church of Aotearoa New Zealand – Inclusion, Gathering, Leadership, Education and Formation, Mission, and Synodality and Change.

The role of women, biculturalism, and abuse in the Church cut across those six themes.

The NZ Catholic Bishops Conference has compiled a National Synod syntheses document from the diocesan phase of the Synod 2023 process and the national hui held in Wellington in June to synthesise the diocesan documents.

The national document has been sent to Rome as part of the Pope’s synodal path to the Church’s future, which will culminate in the Assembly of the Synod of Bishops in Rome in October next year.

Similar national documents have been compiled by bishops’ conferences around the world. They will be used by the Secretariat of the Synod of Bishops to draft a working document called the Instrumentum Laboris in preparation for the October 2023 synod. Bishops’ conferences will also take part in “continental” gatherings, in New Zealand’s case a gathering of Oceania conferences which will include Australia and Pacific island states.

In the introduction to the national synthesis just completed, the bishops say many of the people who took part in the New Zealand synodal process at parish, diocesan and national level expressed great appreciation of the opportunity to reflect on the journey together.

“They spoke positively and with love about the place the Church has in their lives. They want the Church to be a life-giving and active presence in the world, an outward-looking servant Church; a welcoming, inclusive and transformative presence for individuals and communities. They see the synodal process itself being as important as the outcome, because in listening to one another the Holy Spirit is present,” the introduction says.

“For some people, especially those participating as individuals rather than in groups, the process provided an opportunity to express anger, cynicism, hurt and rejection of the Church due to past experiences. The Church was named as a place of alienation, and irrelevant, especially in its teaching on human sexuality. The responses from those who feel ignored, excluded or who have been deeply hurt made painful reading, but their desire to be part of a welcoming Catholic community was clear. Their responses are valued and we are learning from them.”

Pope Francis launched the two-year synod process – the 16th Ordinary General Assembly of the Synod of Bishops in the Catholic Church -- in 2021 to hear what ordinary Catholics from around the world think should be the future direction of the Church.

• Inclusion: We want the Church to be a non-judgmental and safe place of welcome and belonging. Church teaching which excludes some people from the Eucharist is causing pain and hurt. Awareness of those who feel marginalised or excluded can lead to new attitudes and action. Action on inclusion must be part of our synodal journey.

• Gathering: There is great love for the Mass, but also concerns about inclusion and lay participation. A new English translation of the Roman Missal is needed. Homilies must help people to encounter Jesus in the reality of their lives. If lay people are allowed to give homilies, they must have good formation. Small groups for prayer, formation, scripture study, and mission build community are needed.

• Mission: Formation is needed for mission, and help with engaging in mission collectively. Ecumenical activity and interfaith dialogue need to be embraced as part of mission. Shame related to abuse in the Church makes evangelisation difficult. Prophetic leadership is needed in the community on social justice, ecological and bicultural issues. The only public voice of the Church for many is on euthanasia and human sexuality.

• Education and Formation: Further formation is needed for both lay people and clergy in discernment and synodality. There is a need for catechesis in Church teaching. Education and formation in safeguarding is essential for both lay people and clergy. Seminarians’ formation should involve more community engagement, and include biculturalism and cultural sensitivity. Both clergy and laity need formation in collaborative ministry and co-responsible leadership.

• Synodality and Change: The Synod process is exciting and transformative. We want to bring back those who are missing. Synodality and discernment can help us change while holding on to what is central to our faith. We want to learn to journey together in a synodal way.

In a letter accompanying the national synthesis to Rome, Cardinal John Dew, President of the NZCBC, says: “Many people commented positively on this process and appreciated the opportunity to discern together.

• Attached: The NZCBC National Syntheses document as sent to Rome.